In recent years, public health agencies in Indiana have reported an uptick in the number of tick-borne diseases contracted by Hoosiers. Between 2015 and 2017, Indiana averaged 146 reported cases of Lyme Disease and 55 reported cases of Rocky Mountain Spotted Fever.

Though cases of tick-borne illness are relatively rare in Indiana when compared to other parts of the United States, state records likely underestimate the scope of the problem. Multiple factors are fueling tick population growth in the Midwest, including warmer year-round temperatures, habitat fragmentation, and growing populations of preferred hosts, such as mice and deer.

Karo Omodior, an assistant professor at IU’s School of Public Health, has been sampling residential properties and areas near human habitation to improve understanding of the risks ticks present to Hoosiers. Omodior spoke recently with the ERI Explainer to discuss ticks, climate change, and what people can do to lower the chances of contracting a tick-borne disease. 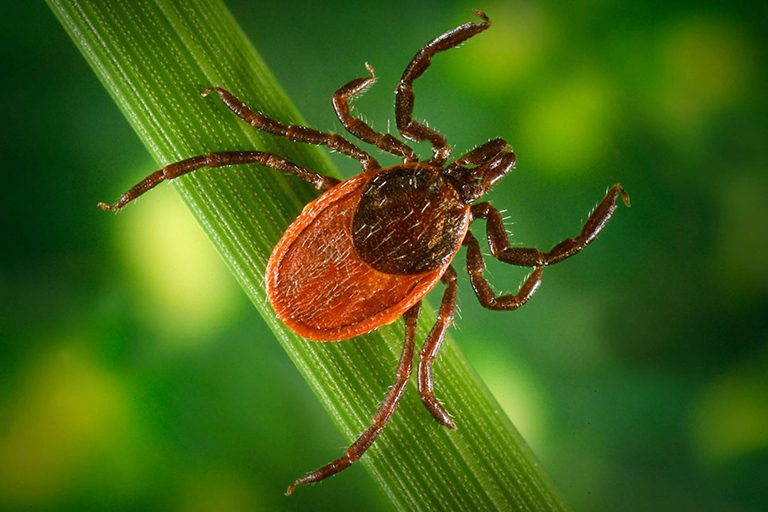 The Explainer: What role is climate change playing in the rise of tick-borne disease in Indiana?

Omodior: When we look at tick-borne diseases, the important things to think about are that when temperature increases due to climate change, several things happen.

One of the things that happens is an enhanced maturation rate for ticks—so the time it takes for a tick to progress from an egg to a larvae to a nymph is reduced. Because temperatures are more conducive, we now have more larvae, more nymphs, and also more ticks who harbor disease.

The Explainer: You study ticks in residential areas. When you’re visiting people at their residences, what are people concerned about?

Omodior: One of the things we get asked a lot is what to do if there are ticks on a property.

For residential areas, there are things that have demonstrable ability to reduce the presence of ticks—what we call integrated tick control practices. These practices include such basic things as regularly mowing the lawn. If the lawn is regularly mowed, the environment will not be conducive for ticks.

If your yard is wooded and you don't have sunlight reaching the floor of the yard, it creates more moisture, and with more moisture ticks feel more comfortable. So trimming trees and shrubs on your property is another good practice.

If there's deer around, then having a fence on the property helps because it keeps out the deer, who commonly carry ticks. One of the things that is recommended as well is creating a 3-foot barrier of gravel or rubber mulch around your property, especially the areas between the woodland and your property.

The Explainer: Are there times of year when people should be especially vigilant about ticks?

Omodior: You should be worried every time you're outdoors because if there are ticks and they're questing (searching for a blood meal), there’s risk. Having said that, you have higher chances of contact with ticks sometime between April and July. Those are the highest risk periods.

The Explainer: Are there strategies that state or local officials should consider to control the spread of tick-borne disease?

Omodior: Some factors that are contributing to increased prevalence of ticks are beyond the control of counties and states. But what states and counties can do is increase awareness among the public. That means providing more information to people.

There are a lot of individuals who we’ve talked to in the state that are concerned about ticks but not aware of some of the basic measures they could take in terms of prevention. That tells you that there's a need for information to be put out there. Once you know that this is something you should care about, then chances are you will do something to protect yourself.

Additionally, more money should be made available for research so that we can determine the infection rate of ticks in Indiana. If you know the general infection rate of common tick species, you can tell the probability that an individual will be infected when they are bitten by a tick.

The ERI Explainer poses questions on environmental change and resilience to IU experts. Got a question for the Explainer? Send an email to eri@iu.edu with “Explainer” in the subject line.