Explainer: Who is at risk of contracting a tick-borne disease?

In recent years, ticks have been getting more attention from public health officials in Indiana and across the country. That’s because a confluence of factors, including warmer year-round temperatures in the Midwest, have put ticks and humans into contact more frequently and increased people’s risk of contracting tick-borne diseases such as Lyme Disease.

Between 2015 and 2017, Indiana averaged 146 reported cases of Lyme Disease and 55 reported cases of Rocky Mountain Spotted Fever. The majority of these illnesses were reported in the spring and summer months when people spend more time outdoors, however, ticks remain active well into the fall.

Karo Omodior, an assistant professor at IU’s School of Public Health, has been sampling residential properties and areas near human habitation to improve understanding of the risks ticks present to Hoosiers. Omodior spoke recently with the ERI Explainer to discuss some of the findings of his work. 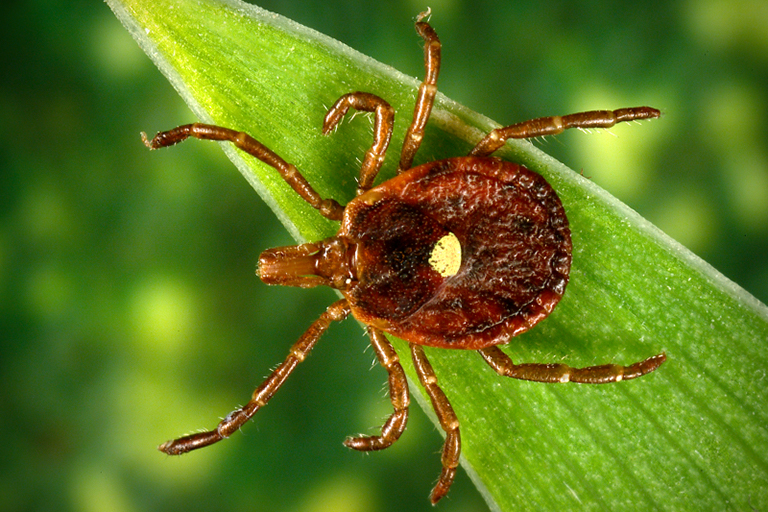 Omodior: Generally, everyone is at risk of contracting tick-borne diseases. I say that because almost everyone does something that puts them in an environment where they are likely to encounter ticks.

Almost everyone lives in a home or a place where you have vegetation. You have trees. You have some wildlife like squirrels, chipmunks, or deer. Wherever you have wildlife, you have the tendency to have ticks in those environments. That is why I say, on a general level, everyone is at risk of exposure to ticks and tick-borne diseases.

Having said that, there are some individuals who by virtue of where they live and the kind of jobs they have are at more risk than the general population. People who work in parks and around wildlife, who spend a lot of time in wooded areas, landscapers, hikers, campers, hunters, these individuals are at greater risk of exposure to ticks by virtue of what they do.

The Explainer: Where are people and pets most likely to encounter ticks in their day-to-day lives?

Pets, such as dogs, can also pick up ticks at dog parks, where some owners may not be as aware or careful about ticks on their pet as others.

The Explainer: How is your research sampling ticks in and nearby residential areas helping us understand the problem of tick exposure in Indiana?

It's easier to collect ticks in the wild where you don't need a homeowner’s permission. But we felt it's important to sample near human habitation because these are places where you're supposed to feel most comfortable and are less likely to take precautions.

The Explainer: You had a paper that looked at self-reported tick incidence. Who is most likely to recognize and report that they have contracted a tick-borne disease?

Omodior: In our study, we found that men are more likely to report tick-borne diseases than women. This could be because men spend more time in the woods or in occupations that expose them to ticks. Incidentally, men are less likely to take personal protective measures against ticks than women. So all of those things tied together make men more at risk.

The Explainer: As you gather more data, what else do you hope to learn about the risks posed by ticks in the state?

Omodior: By looking at county-level health data, we are hoping to shed light on where the greatest risks of contracting tick-borne diseases are. So far, we are finding a lot more reported instances in South and Central Indiana, but the evidence generally indicates that tick-borne diseases are underdiagnosed and underreported.

What's worrisome is if the magnitude of the problem is underreported, then maybe we actually have more tick-borne diseases in Indiana than we currently know. This is especially a risk for rural counties in the state, where reporting can by spotty and where we consistently find more ticks than other places in our field sampling.

The ERI Explainer poses questions on environmental change and resilience to IU experts. Got a question for the Explainer? Send an email to eri@iu.edu with “Explainer” in the subject line.